They are so festive! 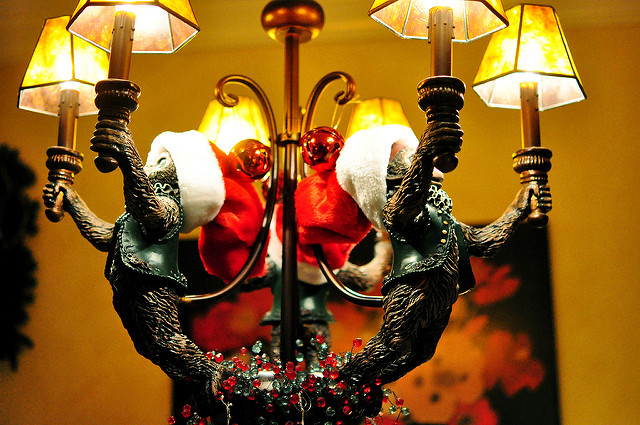 They are so festive!

January 4, 2011 /
So, I wrote this big old long post about the pageant and I realized, this is kind of boring.
I mean, let’s be honest… it’s a bunch of kids you guys haven’t met. I don’t want to just throw their pictures around the internet and get into full on detail because that’s not fair to the kids and their parents.
To sum up, the kids were highly adorbs and even though things went wrong, the mistakes were hilarious. The end.
I do want to share a fun project that the Hubs and I did for my mom though.
She’s got this lamp… chandelier… I don’t know. But it came with the house and I love it. She didn’t like it at first but now loves it and it’s not going to go away. I find it charming.
It’s three monkeys holding lights.
They are wearing little vests.
They all have their own little fez.
Of course they do.
3 years ago, the Hubs and I had this idea to buy or make little Santa hats for them. And every year, as we drove away from the house, we would shout, “We forgot about the monkey hats!”
So this year, on our way down to my parent’s house, I shouted out of nowhere, “MONKEY HATS!”
The Hubs thought it was a new curse word I had come up with and said, “Did you forget something back home?”
“NO! We need to do the MONKEY HATS this year!”
So we went to Michaels a couple of days before Christmas, bought 3 little stockings, cut off the toes, tied a rubber band around the cut section and viola! MONKEY HATS! I pulled my mom into the dining room with the promise, “Lysander and I have a surprise for you.”
I’ve told you all that I’m really bad at setting up surprises right? My mom looked at me with a worried look on her face and was all, “whhhhaaaaaaaaat?”
Then we showed her the lamp. Which she loved. And everyone who came in the house was greeted with, “Merry Christmas! LOOK AT THE LAMP” Because it was just that awesome.
And now I have taken to shouting, “Monkey hats!” as a curse word. You should try it.
Share it: