In Which I Fly 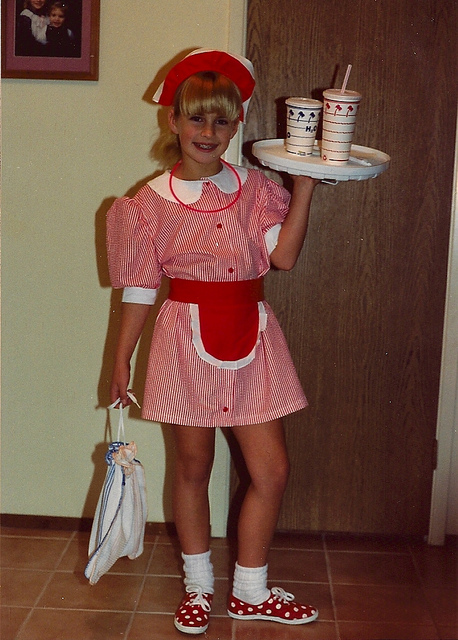 In Which I Fly

Another fabulous story, boys and girls. A story that has been retold and brought up many times in our family. Many, many, MANY times. Because it’s just sooooo funny and it involves me embarrassing myself and those are the best kind of stories. In my family, at least. Oh my gosh, look at me. I was supposed to wear skates for this costume but I’ll explain why I wasn’t allowed. (see hill below)

Anyway, there was this park by our house and it had a really big loop that was perfect for Rollerblading. I was a serious Rollerblader and because we lived on a hill at the time, I really enjoyed going to this park. There wasn’t any Rollerblading going on in front of our house.

ooo side note, I used to Rollerblade around our garage and in the driveway. I would also choreograph Rollerblade dances set to music. One time, I was really into it and my “audience” was in the garage so I wasn’t even paying attention to the street. After one spectacular hair toss, I looked over and this older couple was just standing there on the sidewalk, kind of chuckling at my routine. People, this was SERIOUS. I was going to be discovered one day and didn’t have time for their mocking. But I was super embarrassed anyway.

Anywho, so I’m at the park and my parents are hanging with my brother and I decide I’m tired of Rollerblading and I just want to swing. So I head over to the swings but because I’m going to go Rollerblading again really soon, I don’t take off my skates.

It was that second clap that did me in, folks. Taking my hands off the swing chains to clap knocked me off balance the same instant I was swinging up. The Rollerblades were so heavy they pulled me off the swing, I did some sort of back flip and I landed face down next to these huge rocks.

Face down, in the sand. I was just on a swing and now I’m eating sand. My parents rush to me, turn me over, make sure I’m not missing any teeth and pull a Dumb and Dumber move: skip to 1:05

Full on, straight up laughing. I’m thinking now it was out of relief but it just felt like they were laughing AT me. Come to think of it, I’m sure they were. They probably told me to take off my skates but I was way too cool to do that.

The whole car ride home I was crying softly to myself as my parents had a great laugh about it in the front seat. I secretly wanted to laugh too but I wanted them to be sure that I was really hurt (but not really).

Thus ended my career as a professional Rollerblader/acrobat.