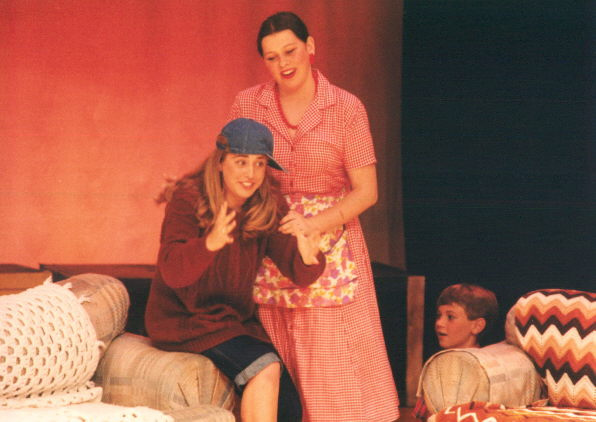 A long time ago, in the Summer of 1999, something magical happened.

Up until that point I had been performing in musicals through my grade school and high school. I was surrounded by people that I saw every day in school. My directors were also my teachers. We had no choreographers, no real costumers, just our teachers and some parents volunteers.

I got involved in musical theater in 5th grade. That musical is a story unto itself. Before then, I have never been involved with any choirs or anything. I had piano lessons since I was 8. The shows were ambitious for my small private school (Fiddler on the Roof, Sound of Music, Oliver!)

High school, even more so. The Secret Garden, Children of Eden, Cinderella, The King and I. But it still felt like something was missing.

Until I auditioned for Summer Youth Theater. I had wanted to audition for Joseph the year before but for some reason didn’t. Maybe it’s because I wouldn’t have had a solid ride from my parents. I can’t even remember if I was driving. Oh wait, I was driving but I had a job. Whatever. I didn’t get to audition when I wanted.
In 1999, the show was Bye Bye Birdie. I had never met the director before, I had never even seen my fellow cast mates before. I vaguely knew one from church. I ended up getting the part of Kim McAfee when I didn’t even think I was going to make the show. I knew no one, I had no training, no experience working with a choreographer (although I did take dance lessons for a few years).

What followed was one of the most magical summers of my life. I’ve only had one show experience like that since (Beauty and the Beast 2006!) but it was truly amazing. I seem to have good luck when I audition for a show where I know no one.
I danced harder than I ever danced before. I would get to rehearsal early and wish it would run later. The costumes were adorable. The cast mates were like family by the end. My parents came to see it and couldn’t believe I was in such a professional looking show. (compared to the other shows I had done) After months of rehearsal, I hadn’t let on that this theater was several steps above the last places where I did shows.

I made friends that I’m still in close contact with today. I showed my parents that this was something I was willing to work hard for. It was a show that just had “it” from the very beginning.

But those kinds of experiences stick with you. I will forever be chasing after shows like that, that push you and make you work hard. Where you welcome that kind of work and appreciate the long hours, bruises, soreness and lost voices. The camaraderie backstage, the reactions from the audience. It’s all worth it and is not often repeated. Conrad on his bike Dancing at the Icehouse (I see Dori and Marissa!) What is that “thing” in your life? What is it that makes you want to show up early, stay late and just keep practicing until you nail it?