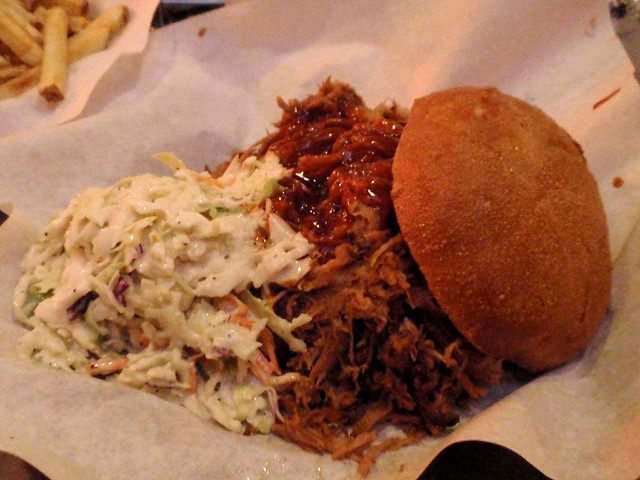 So there’s this place. It’s in San Diego, it’s BBQ and it’s worth it. Anyone from San Diego knows that if you want BBQ, you go to Phil’s. So for my brother’s birthday in September, we went to Phil’s.

It’s actually kind of ridiculous because the line to GET IN was an hour long. And you just stood there in line, creeping towards the entrance. We got to see a family just sit there and rub it in us poor souls who just wanted to eat that they were there and they were not moving. Then, to add insult to injury, they pull these tiny dogs out of their bags and let the dogs EAT THEIR SCRAPS. In the restaurant. You should have heard us. Not only were they totally done with dinner and not budging but they brought their DOGS to the restaurant and then they let said dogs climb up on the table and eat their food. Luckily a staff member came by and told them to knock it off.

Anyway, the food. That’s what you’re all here to see right? Vegetarians, you may want to turn away.

Hubs got some random order of ribs that was really innocent in it’s description but ended up being the biggest pile of ribs any of us had ever seen. I got the pulled pork sandwich which was so good but honestly, I could only eat half of this. It was that much food. The birthday boy, lovin’ it. The boys were all watching numerous football games. We were so full!