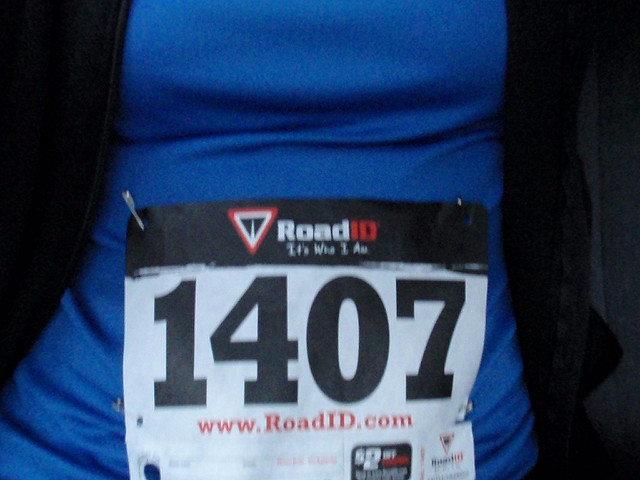 I wanted to tell you all about this 5k that I did this morning. There were some awesome things and definitely some weird things.

I got up around 6:15 after sleeping horribly through the night. I had dreamt that I already ran and ran it in about 10 hours. Yikes. I also dreamt that I slept through my alarm. Ugh. I eventually just gave up, got up and got dressed.

Breakfast was a bagel thin with peanut butter and some water. I showed up and got registered and got a sweet shirt. Although, I think I might have misjudged my size. Oh well. And my number, of course. And wanted to take a nap since I was there so.early. See that water on the back window? Yeah, it was drizzling which is completely fine by me. Much better than blazing hot.

I was a little bummed because I didn’t know anyone there. There were only about 100-130 people there total, which was the first weird thing. I couldn’t believe the group was so small. Also, a lot of these people looked like pros. You know how at some 5ks there are groups of people who are just there to walk it? Like, putt along plugged into their ipods? Yeah, there were about 5 of those people. The rest were track teams and triathletes. Kinda crazy.

We take off and I’m running a pretty steady clip but I’m noticing that I’m falling further and further back in the crowd. I just had to keep reminding myself that I was running my race, not someone else’s. I got super excited at the 1st mile because I hadn’t stopped running yet!

Another nice surprise at mile 1 was seeing the Hubs at the corner, in our giant lawn chair with the camera! I had left him about an hour before, all curled up in bed. I got a huge smile on my face and it gave me a big boost of energy that pretty much got me through to the end. I thought I would see him at the finish line but it turned out to not be the case. See that couple in front of me? I paced off of them. They were running at such a good rate that in keeping up with them, I managed to run the whole. thing. I only stopped to walk for about 5 seconds but I was feeling so good that I realized I didn’t need to.

That was the cool thing about this 5k. I felt amazing the whole time. I didn’t cramp up, my legs didn’t hurt and I didn’t feel tired. I wasn’t even really out of breath the whole time.

I finished and started looking around for the Hubs but it turned out he didn’t know where it ended and just went back home. Totally fine by me, it wasn’t like I was stranded or anything and I was just so excited to see him there!

Here’s the weird thing. I don’t think my finish time was that slow… 32:37. I had run a 5k two years ago and it was something like 45:00 but there were TONS of people behind me. When the Hubs pulled up and set up his chair, he caught sight of the first runners. So many people passed by him that he thought he missed me. I guess the crowd had really thinned out by the time I rolled by which made it look like our group was going super slow.

I think it was just the fact that there weren’t a lot of people at this race. I mean, I was getting passed up by people with prosthetic legs, for crying out loud, so I know there were serious athletes but I also know I’m not super slow.

Another weird thing was that it was also a triathlon. Almost EVERYONE who was there was participating in it. Except for me and a couple of 8-year-old kids. So yeah, it just seemed like I was one of the only amateur runners out there.

My husband thought it was because there was no “cause” we were running for, like breast cancer or AIDS walk and that would explain the lack of a crowd. It’s also only the 3rd year of the event so that could mean something as well.

Whatever! I had fun, felt great and got a new personal PR which I’m proud of. I came home, showered and went to church but I was clearly dehydrated and hurting. I have had a ton of water, took a quick nap and just made Branny‘s sweet potato and black bean burritos for dinner. Yummmmm. Back to new and proud of myself for branching out and trying something on my own.